Full Alex McLeish coaching session about crossing the ball and finishing into the net. The crosses are made from the wing and are from different angles, different heights and speed of the ball. 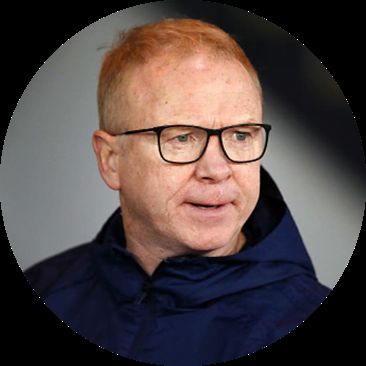 Crossing and finishing warm up

This is a warm up to get players used to playing the ball wide and creating space for the wingers and the full-backs to cross into the strikers who must finish past the goalkeeper.

Attacking play with build up play on the wing.

Crosses should be played in the space between the goalkeeper and the defending players.

Crosses should be along the ground in this warm up.

Movement of strikers to cover front and back posts key to success.

You need to use 2 mannequins set up as defensive full-backs 25 yards from goal and a supply of balls with coaches on the half way line.

The centre midfielders receive the ball and play a pass outside to attract the opposition midfielders. Once the pass goes outside it is moved up the wing with support from the full-backs that have made runs down the wing – winger or fullback then cross the ball into the strikers who shoot at goal

The two centre mids receive a pass from the coach and pass to each other 1 touch – play starts when the winger calls for the ball. The nearest centre mid takes a touch and then plays wide using alternate sides.

Rotate the players so the Centre-mids become the strikers and the strikers become centre mids also swap the fullbacks and wingers. 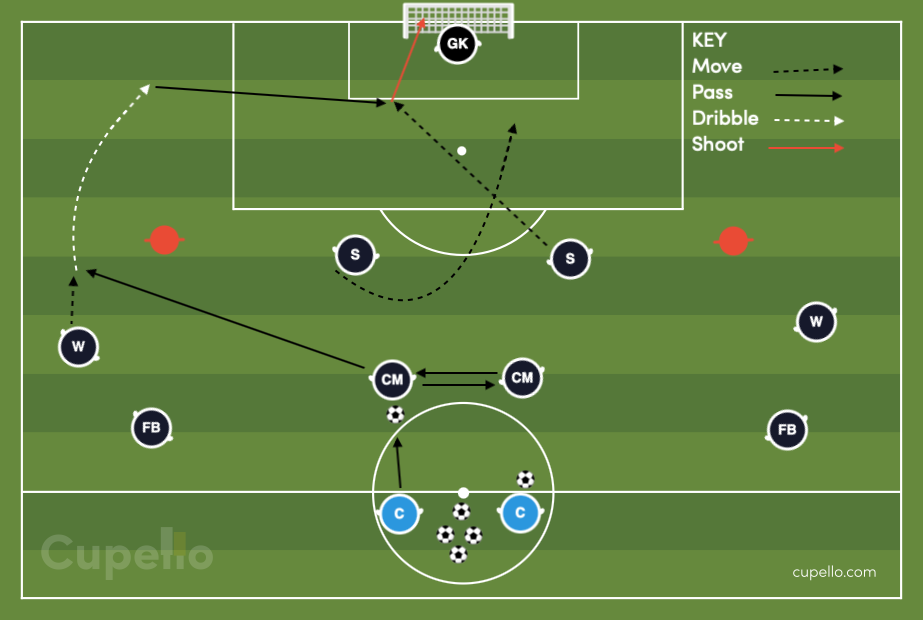 Serve one: the ball is played to the wide midfielder who gets the ball out of his feet dribbles past the mannequin and crosses into the waiting strikers. 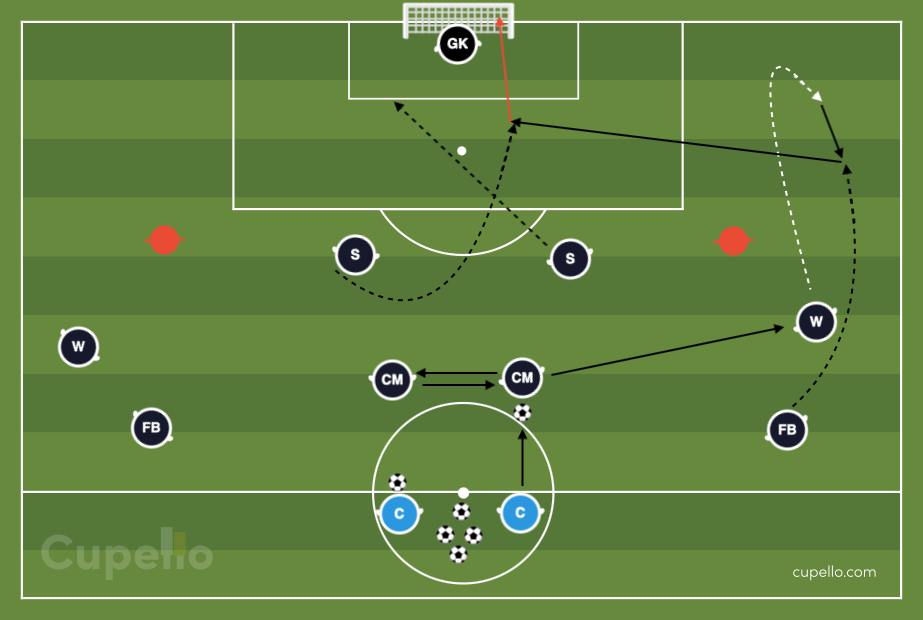 Serve two: the ball is played to the wide midfielder who dribbles the ball past the mannequin then turns and passes back to the fullback who crosses into the strikers. 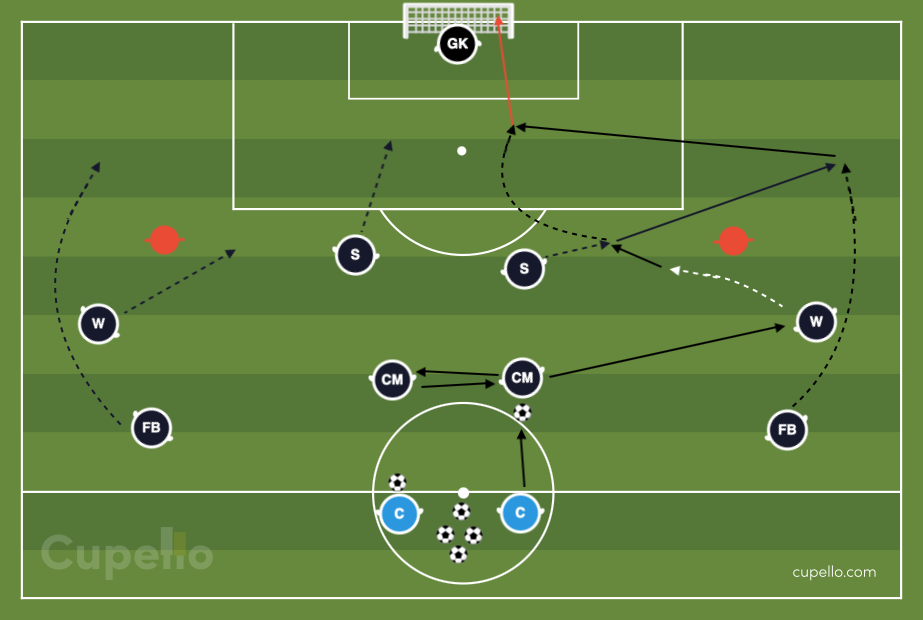 Keep your arms out at all times when dribbling around defenders. You can use them to brush past players, improve your balance, and keep players farther away from you.

Good balance will help you cut quickly in any direction while retaining control of the ball.

Land on the front of your feet every step, whether you are dribbling forward with your laces or cutting across your body using an inside touch.

Try to play one touch but when a bad pass is made players can us an extra touch or control with the help of the other foot. The speed of pass will effect the receiving of the ball, too hard and it will be harder to control with one pass, too soft and the drill will be too slow.

Coach can slow the drill down and repeat parts of it so players can understand the movement and get used to the play.

Switching the crossers will make the play different with accuracy and speed of cross key.

Crossing and Finishing phase of play

In this small-sided game players are crossing into areas that attackers can shoot at goal from. Look for good build up play into the attackers. In the progression the 4 neutral players link up with the team in possession creating overloads

Play out from the back into the full-backs

Technique to cross should be supporting foot next to ball, use toe/instep to cross the ball with height and distance

You want to see build up play into the wide players with strikers moving to front and back positions in the attacking zone to cover the crossing of the ball into the box.

Crossers should put the ball into the strikers from different places – right on the goal line and nearer to the half way line so the angle of the cross is different.

Try lofted crosses and balls played in on the ground. 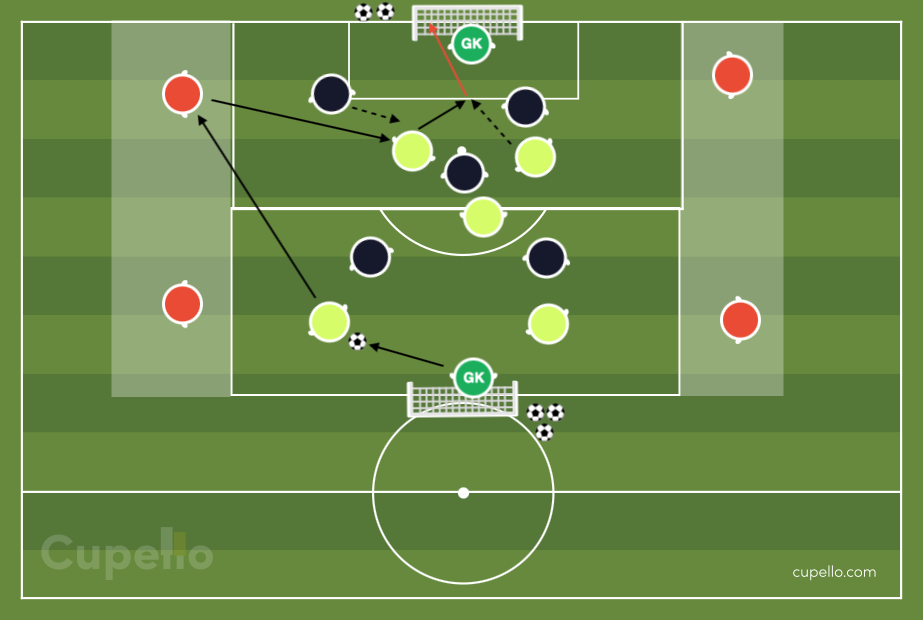 Wide players must combine to get crosses in.

Defending team can go into the shaded zone to challenge the wide players.

Wide players can come out of their area and play for the team in possession creating overloads in favour of the attacking team. 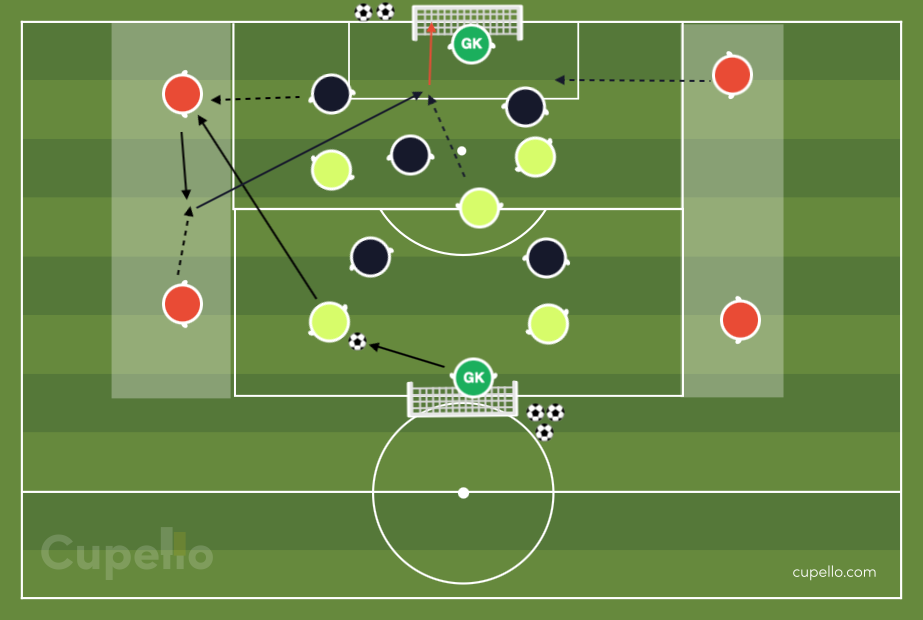 Make attacking players one or two touch to make it harder.

Make defending players one or two touch to make it easier.

In this game the attacking team is trying to move the ball wide breaking down the defence to create goal scoring opportunities. Coaching points will develop as play advances and teams make mistakes in attack and defence.

Split into two teams, one of 8 players in a 2-4-2 formation who are the attacking team and a team of 7 + a goalkeeper set up GK-4-2 with one player at the end that is a target player for the team of 8 to score by passing to him/her instead of scoring a goal.

The target players always starts the drill with the team in yellow attacking.

Black team must hit the target player to score.

Start with free play for a few minutes and look for coachable moments, showing players how to get the ball wide passing into the centre and out again to draw the defenders in they hit them with wing play.

If the defending player manages to press and hold up the winger then he/she should turn and pass back to the fullback. 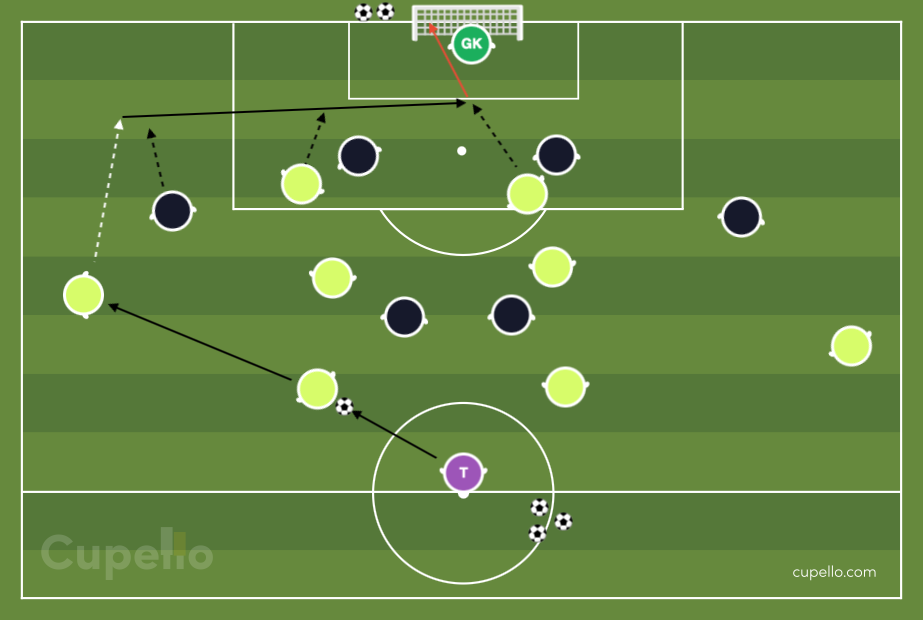 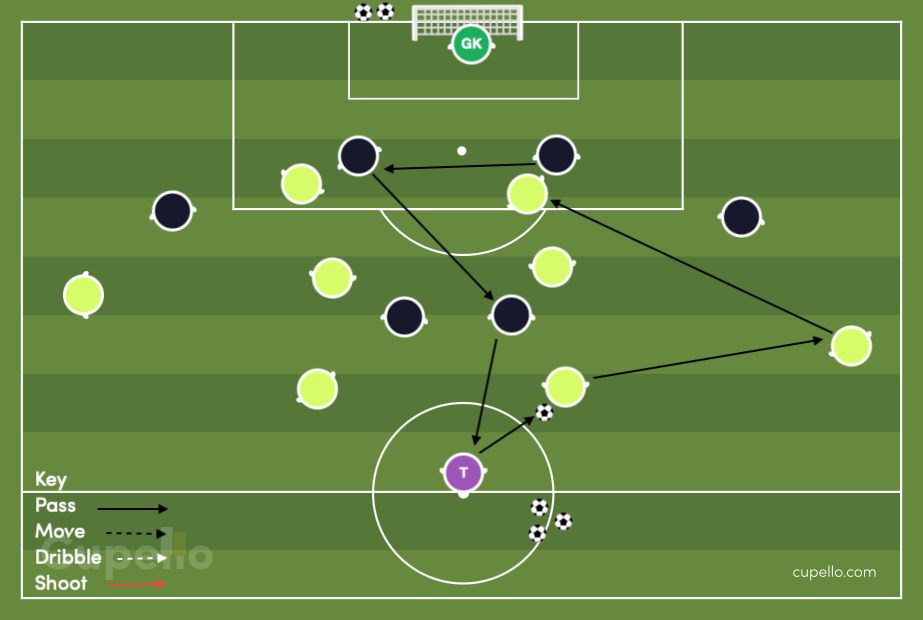 Keep your arms out at all times when dribbling around defenders. You can use them to brush past players, improve your balance, and keep players farther away from you.

Good balance will help you cut quickly in any direction while retaining control of the ball.

Land on the front of your feet every step, whether you are dribbling forward with your laces or cutting across your body using an inside touch

Creating space and time are two of the most important factors in the game. When going 1v1 against an opponent attackers need to use feints and body skills to do this. When defending it is important to get players to look at the ball and not the player so they are not so easily deceived.

Try not to correct the players during play as this again slows play down and does not allow for self correction. It is important that you correct any problems during a break

Make players one or two touch to make it harder

Add players to make overload bigger to make it easier

700 appearances for Aberdeen, played under Sir Alex Ferguson. Manager of Scotland, Rangers, Aston Villa, and Birmingham City where he won the League Cup.